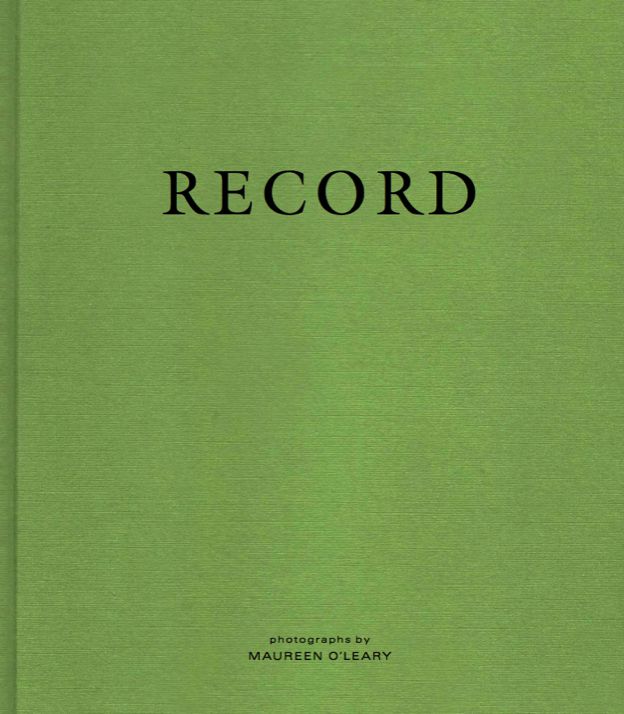 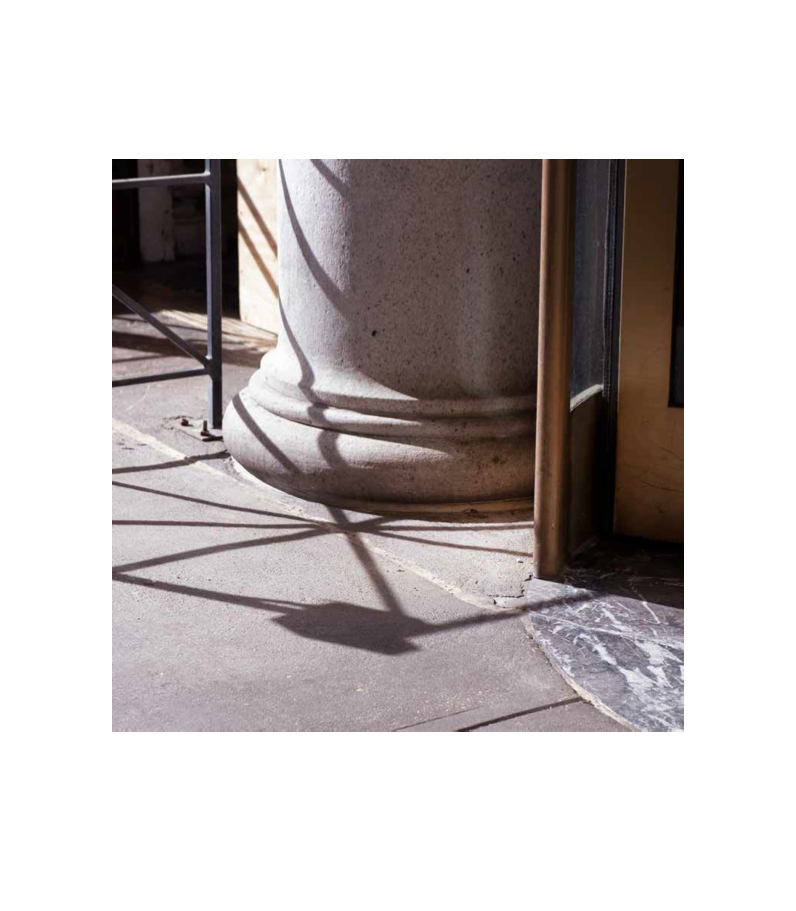 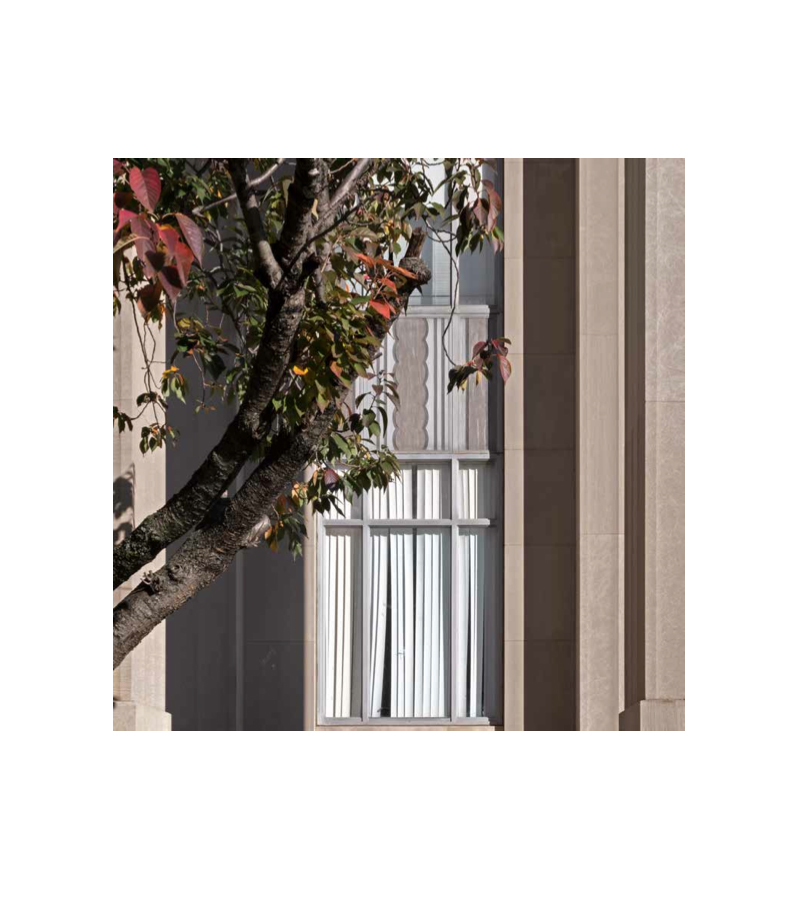 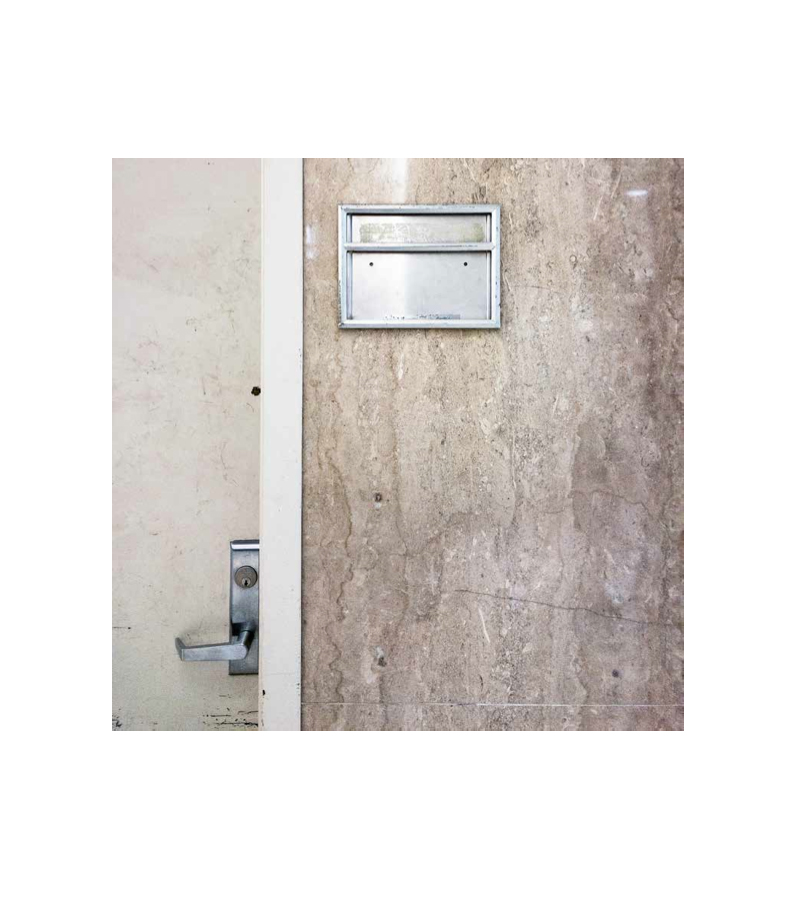 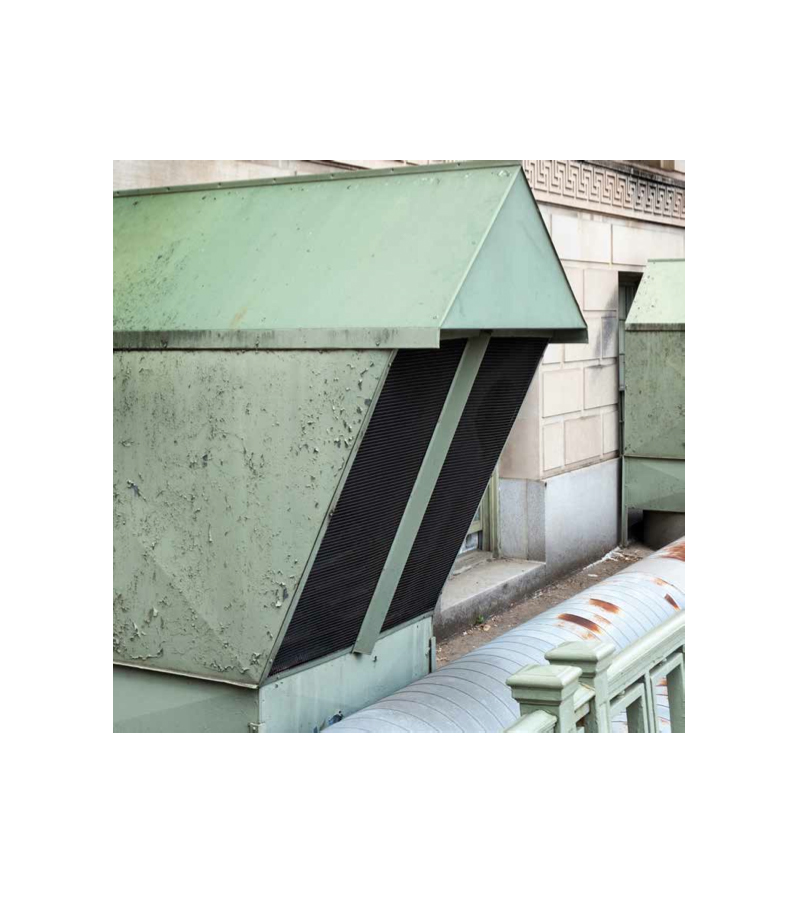 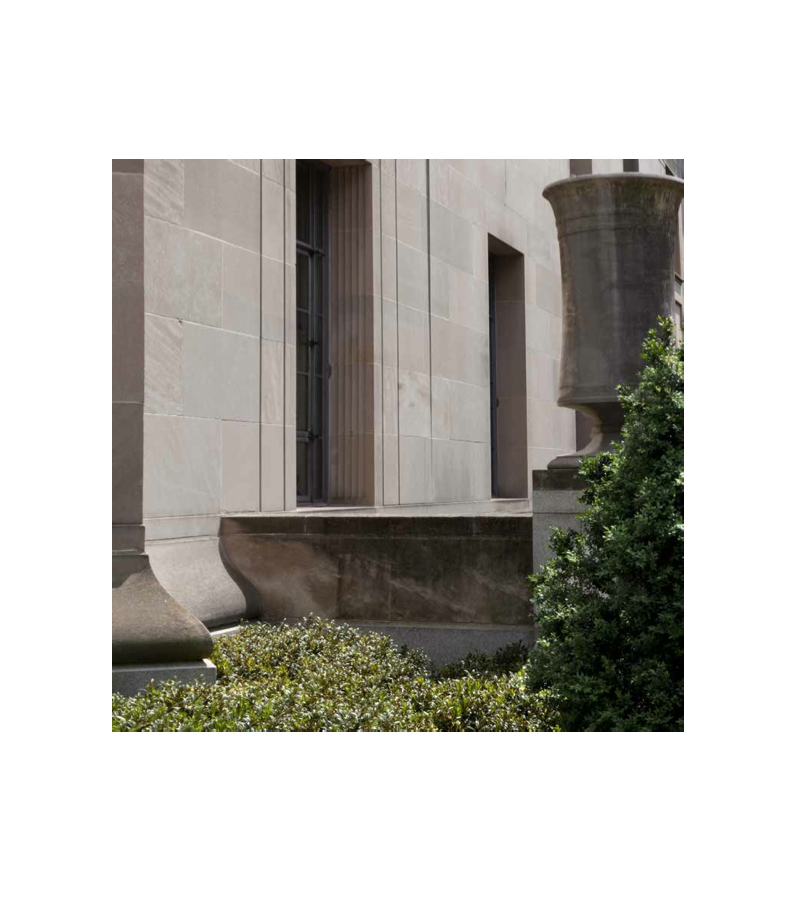 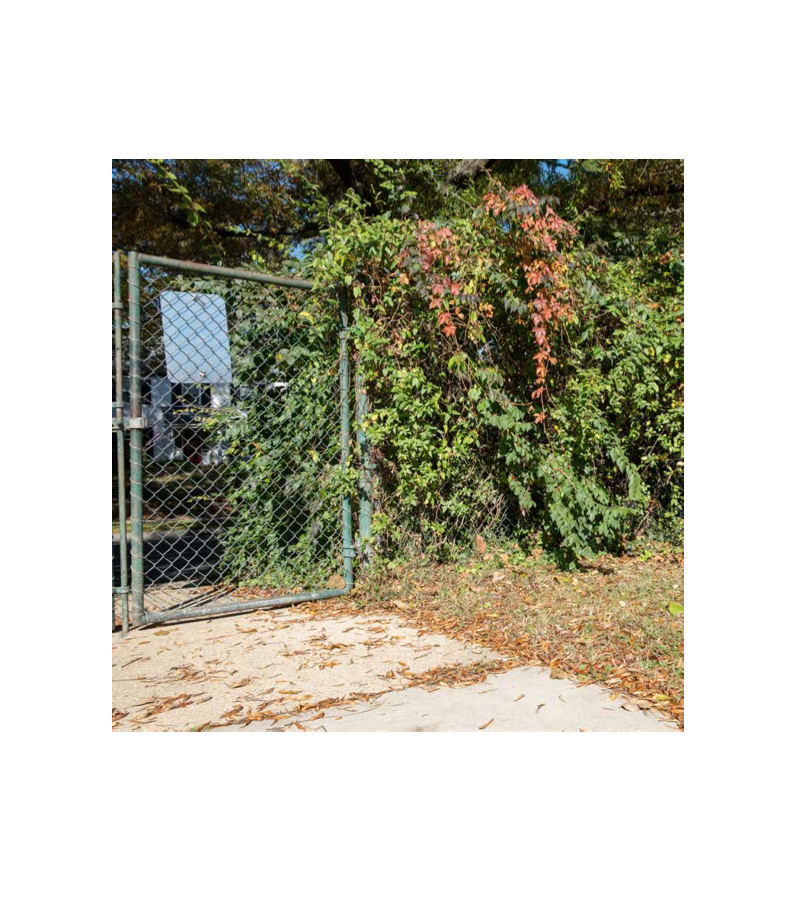 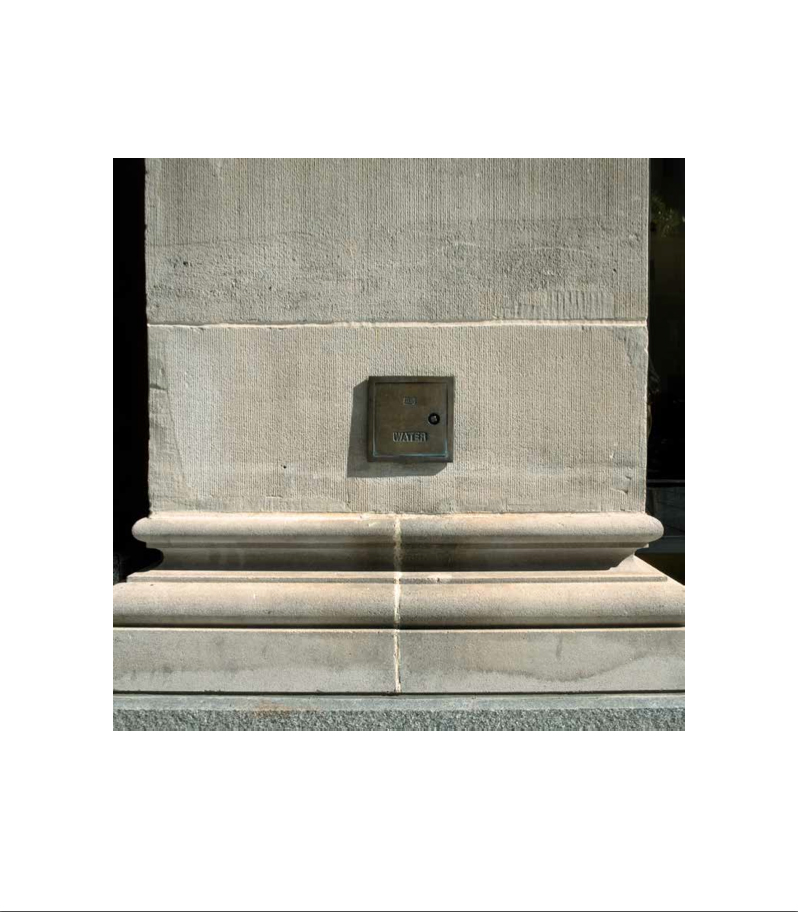 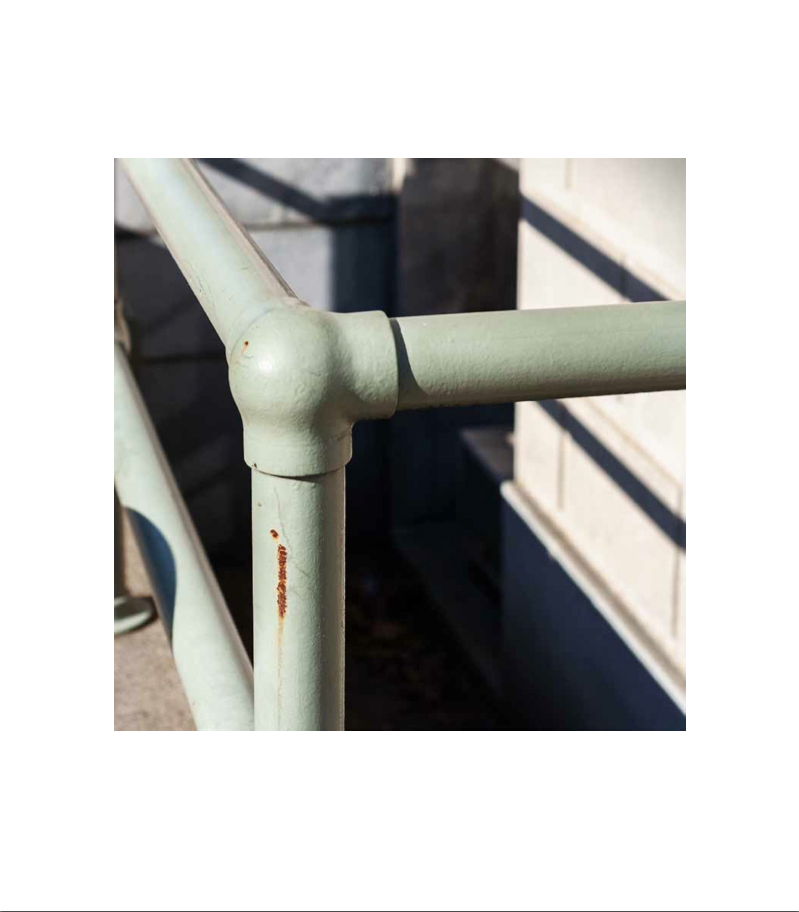 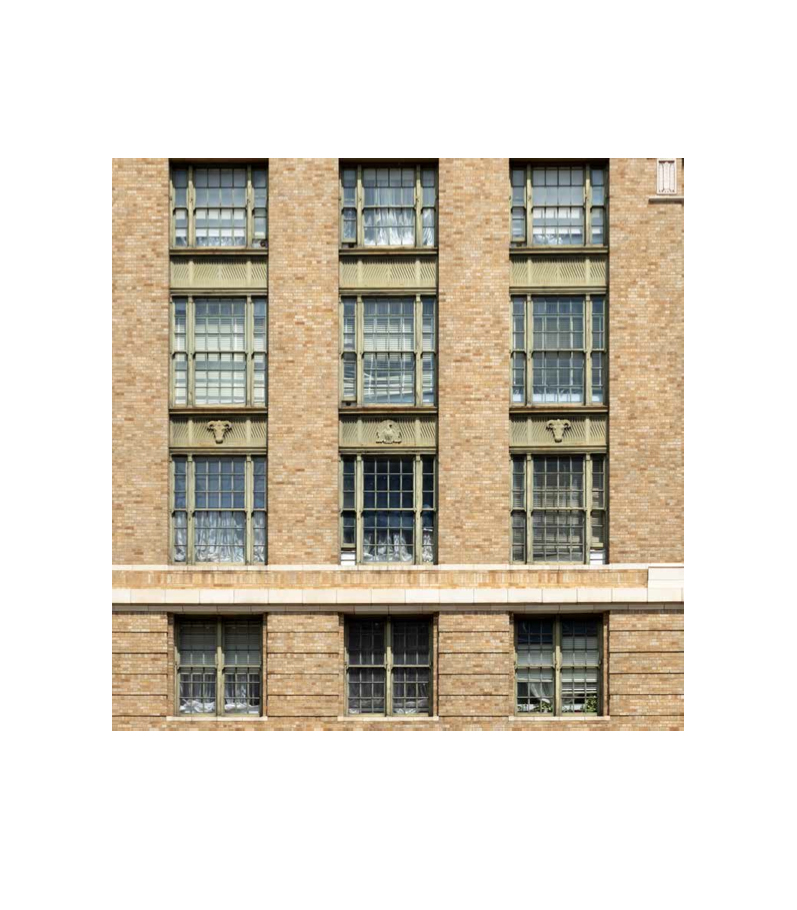 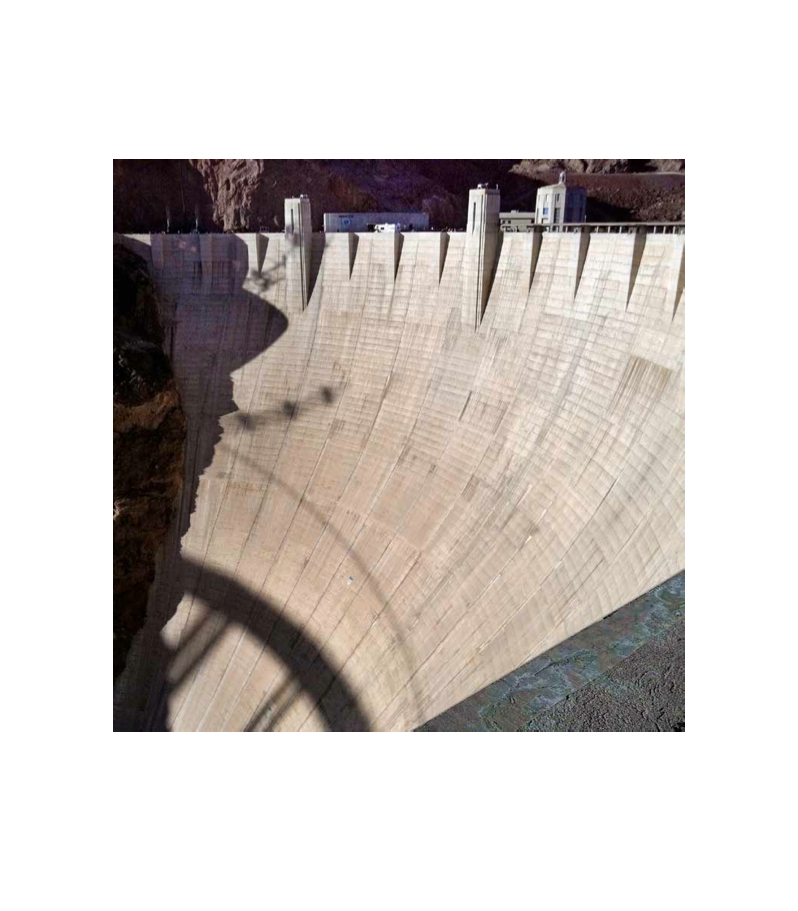 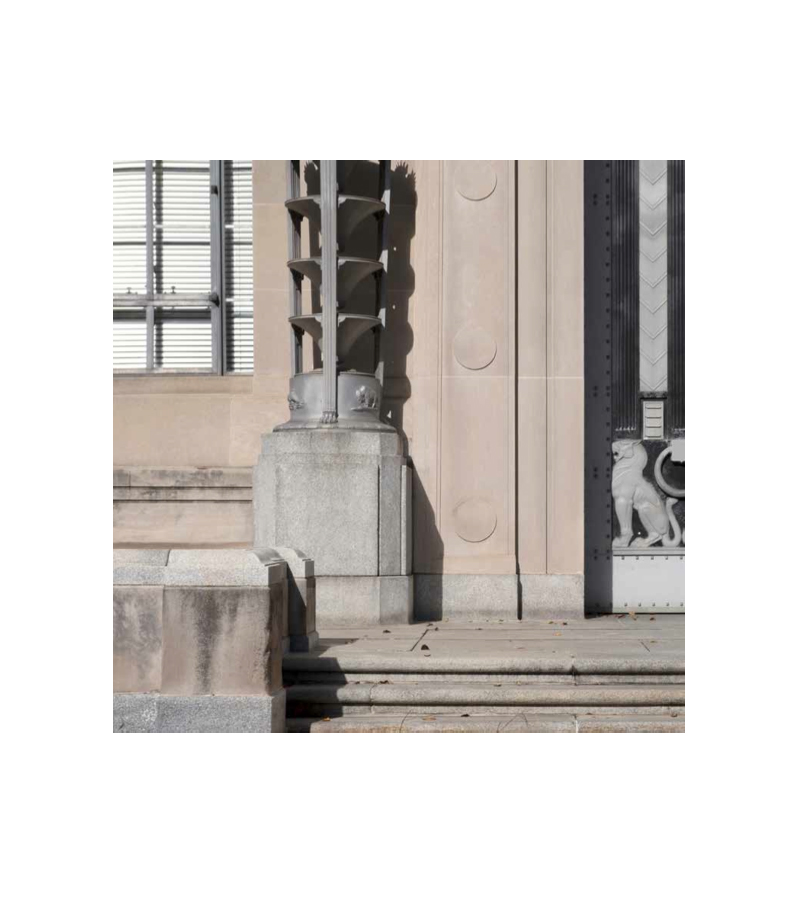 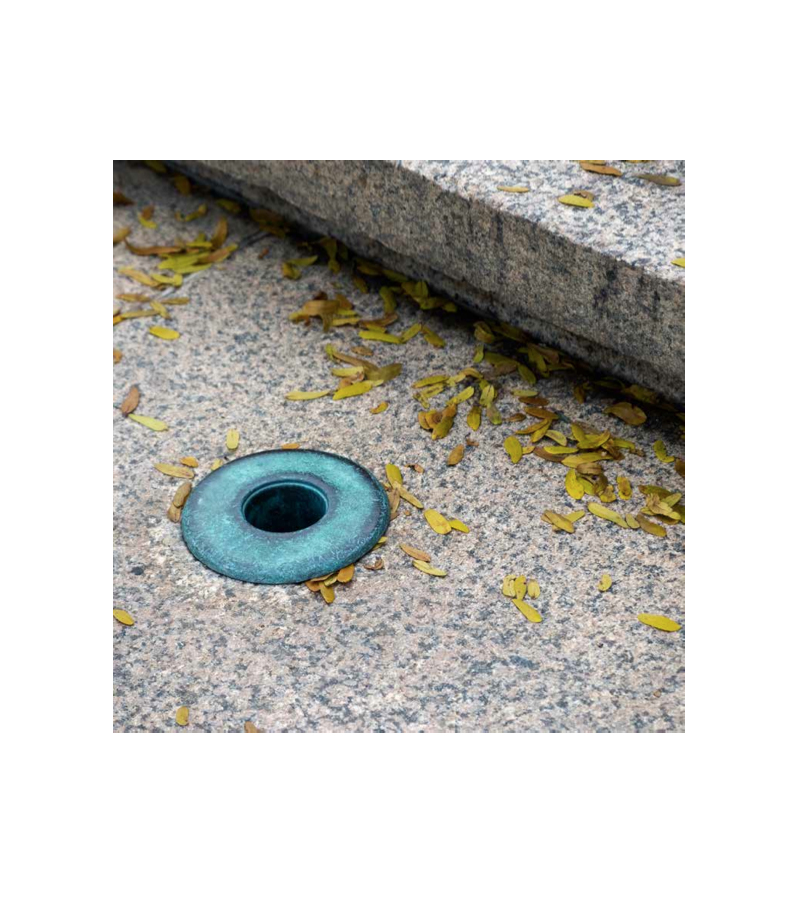 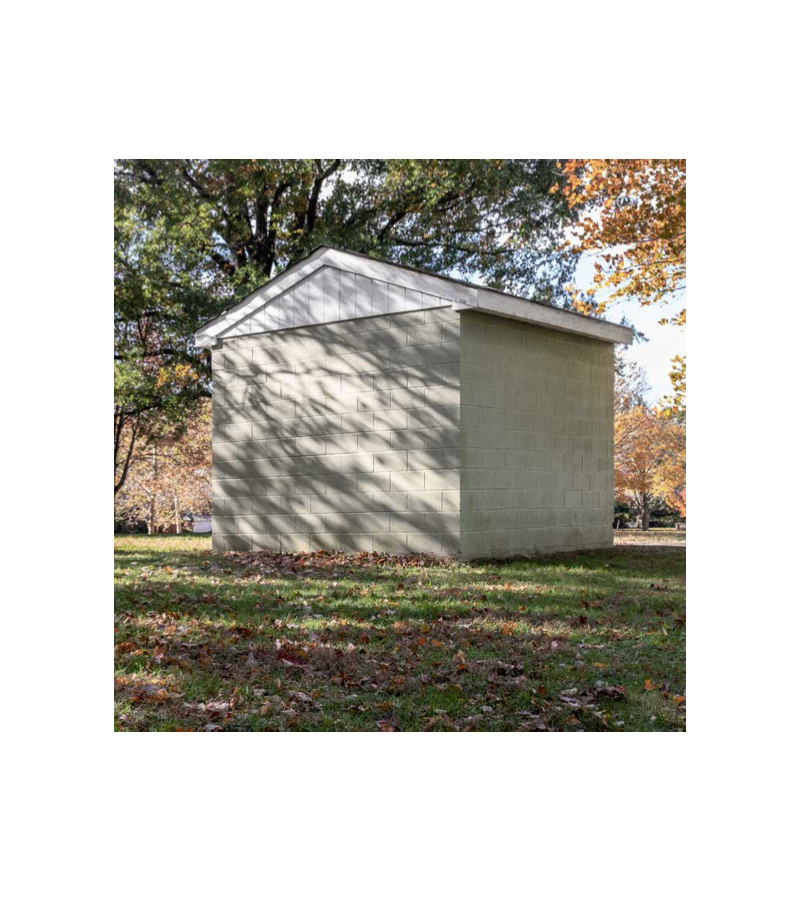 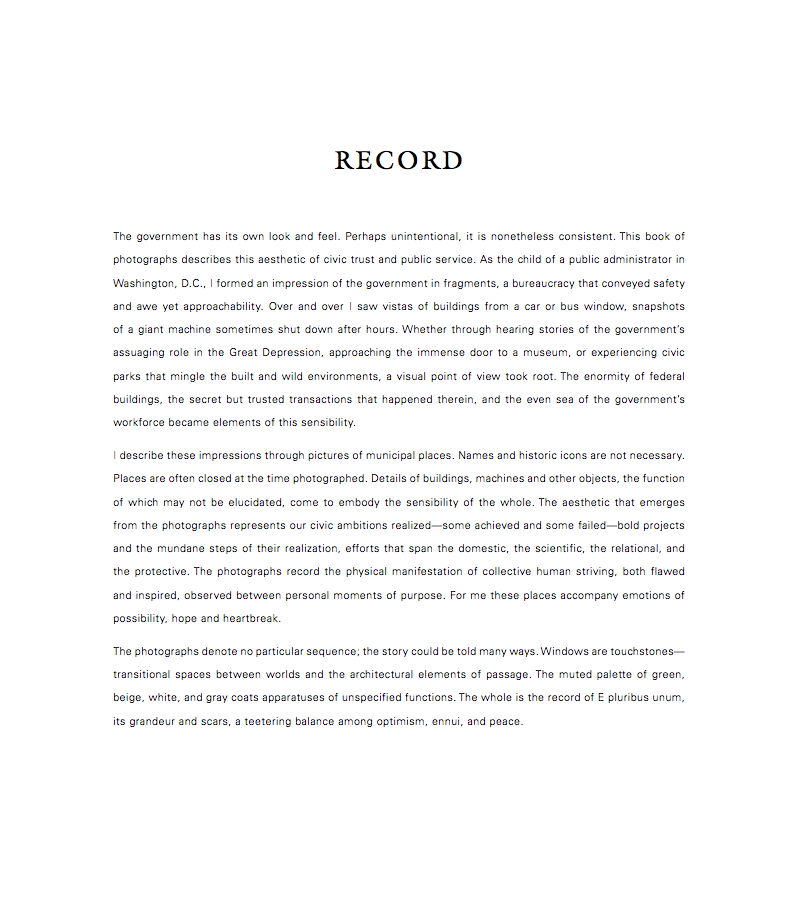 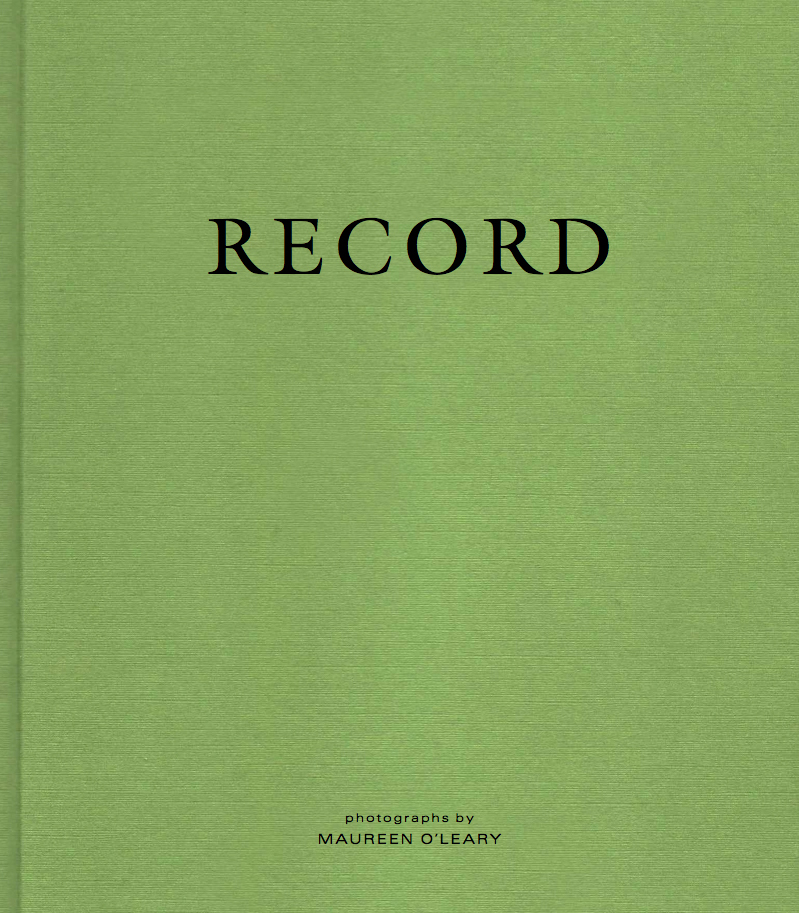 Published by the Midwest Center for Photography, Wichita, Kansas.

Summary - "Record", is a collection of color photographs of civic structures that builds a quiet, visual paean to things governmental through indirect observations. Shot and printed by artist Maureen O'Leary with a layout by designer Matthew Polhamus, the photographs are embedded in a cover that replicates an ordinary government notebook as if the images were the casual and unfocused observations of a mundane work day. The photographs span the motifs of the built environment, bureaucracy, science, parks, equipment and the stewardship of the natural world. The book has a one-page essay by O'Leary.

The photographs were taken primarily in Washington, D.C. but specifics are deemphasized creating room for the imagery alone to elicit feelings, potentially complex ones, about the ethos of our collective national striving and how it takes physical form. The primary audience for the book is art book collectors who appreciate romantic emotions in the everyday and the mundane.

Visuals - "Record" consists of 42 square, color photographs arranged in sextets across sixty-four pages of a 10.5 X 12 inch book. There is also a short essay by O'Leary. The book has a linen hardcover design replicating a standard government-issue notebook (front, back and spine).

About the photographs. These photographs describe the aesthetic of government as told through quiet images. The photographs collectively comprise art direction for a movie unfilmed. As a child of a public adminstrator in Washington, D.C., O'Leary absorbed in fragments the business of the government, vistas from a car window and snapshots of a giant machine shut down after hours. Television filled-in policy fragments that transmitted a nonspecific sense of purpose. Whether through stories of the government's assuaging role in the Great Depression, or through experiences of civic parks mingling the built and wild environments, a visual point of view took root. The maw and enormity of federal buildings, the secretive but trusted transactions that happened therein, and the even sea of the workforce became elements of a sensibility.

O'Leary tells the story of this evolved feeling through pictures of municipal places. Proper nouns and iconic recognizability are not necessary. Places are often closed at the time photographed. Details of buildings and objects, many of which are dominated by their functionality, become the resting places of distracted attention. The sights are the physical manifestation of collective human effort, both flawed and inspired, a living mausoleum of human striving. An aesthetic emerges by default as the accumulation of ambitions realized, some achieved and some failed, bold projects alongside the mundane steps of their realization, and efforts that span the domestic, the scientific, the relational and the protective.

The visual cues are not sequential, the journey implied does not follow a single path. Windows are touchstones, the transitional spaces between worlds and the architectural elements of passage. The photographs emphasize where the eye falls when not focusing, both downward to earth and upward to the sky. The resulting muted palette of greens, beiges, whites and grays coats apparatuses of unspecified function — buildings of solidity with no way in, and openings that only partially reveal their holdings. Historic specifics are inessential, secondary to setting, pace, and mood, and the teetering balance among optimism, ennui and peace.

The individual photographs are untitled. The project was conceived over ten years ago; the photographs have been shot primarily in Washington, D.C. and other U.S. locations.

About the artist - Maureen O'Leary is a painter and photographer based on Long Island and in New York, New York who makes work about nature, ordinariness, and daydream. Her work is often about light on form and chronicles her experiences as would a diary. She received her B.S. from Yale University, New Haven, Connecticut, and additional training at the International Center of Photography, New York, New York. O'Leary printed her first book of photography, "Belle Mort" (2013), with Paper Chase Press, Los Angeles, California in collaboration with artist and poet Terri Phillips, Memphis, Tennessee. Her photography has been shown here at the Midwest Center for Photography, Wichita, Kansas; Wayfarers, Brooklyn, New York; Marshall Arts, Memphis, Tennessee and Higher Bridges Gallery, Enniskillen, Northern Ireland, among other venues. "Belle Mort" is now part of the Indy Photobook library in the public collection of the Beinecke Rare Book and Manuscript Library at Yale University. O'Leary's work was recently included in the retrospective publication "Ten Years of Photographs" (2018) by Linda Robinson, curator of the Midwest Center for Photography.

Design - O'Leary conceived the overall design of binding the photographs inside a government notebook, as well as the use of little text. Designer Matthew Polhamus has interpreted this idea for the proposed. Polhamus chose a stark layout with photographs repeating in sextets in which images alternately face each other or a blank page.

About the publication - The Midwest Center for Photography has been instrumental in the photographic inspiration of Maureen O'Leary and has supported her vision and her insightful concept contained in her portfolio of photographs. The publication of this book, "Record", would not have come to fruition without the ineffable support of the Midwest Center for Photography. The curation of Linda Robinson has defined an aesthetic that has been an inspiration to O'Leary through the vision and the selection of work that is nurtured here at MWCP and how there is a defined Midwestern aesthetic regardless of where the photography work is made.

The curation of photographs utilizing minimalism and the interest of everyday banality of the Midwestern aesthetic by Linda Robinson was something that caught the attention of O'Leary and has been a source of inspirational nourishment over the past several years. Linda Robinson discovered O'Leary's photographs and has fostered the development of the body of photographic work in the project resulting in the publication of "Record" through critiques, image editing and sequencing.

Related publications - Recent books of photographs or photo essays that resonate in design or feeling with "Record" include Teju Cole's "Blind Spot" (Random House, 2017) in which photographs were joined for their collective sense of place. Unity emerges from seemingly disparate images that Cole collected worldwide and that describe a sense of sameness despite international movement. Likewise, Robert Adams, "I hear the leaves and love the light" (Fraenkel Gallery, San Francisco, California and Nazraeli Press/Chris Pichler, 1999), described, through the point of view of a dog, how a suburban backyard is tantamount to paradise. This disarmingly local vision becomes a gently romantic view of the suburbs, upending a truism that such life outside the city is bland, confining or desperate.

Kathy Ryan, photo editor of the "New York Times Magazine", has also recently selected very direct and unironic images of courthouses, libraries and other public facilities to accompany civic story-telling in the magazine. For example, the photographs by Alexander Ingram for the magazine's article about the community of Valdeluz, Spain explored a mixed assessment of a built utopia that echos some sentiments described in "Record". Ryan's photography book, "Office Romance" (Aperture, 2014), also elevated mundane visions but in the corporate work environment. Finally, Jem Cohen's photography for the D.C. punk band Fugazi album cover for "In on the Kill Taker" captures similar colors and perspective on federal monuments.

As noted above, the book of photographs, "Record", could be described as art direction for a movie unfilmed, and, as such, can be compared to films such as "Il Posto" (1963) by Ermanno Olmi. Olmi's expedition to bureaucracy looks from both the outside and the inside through the eyes of someone inexperienced. The work presented in the book "Record" also relates to the art direction in films by Hal Hartley (e.g., "The Unvelievable Truth [1989] and "Trust" [1990]) that embrace the overlooked or the unwanted through careful style observation of a restricted culture.

Drawing on even deeper historical context, Atget's photography of old Paris, captured on the eve of its demise, is also a related project. The bureaucratic and civic structures shown in this proposal also record an existence at risk of eroding. Although Atget's compositions did not generally focus on details, his sensitivity to buildings that were in the process of being lost is an important companion endeavor to the viewpoint explored in "Record".